Bedwetting is most common in children under the age of six. 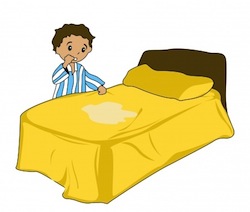 It is not abnormal for young children to wet the bed at night – even when they have learnt to use the toilet during the day. Don’t be unduly concerned about bedwetting unless your child is older than six. Before then, your child’s body may not have developed enough to control bladder action during sleep. Time usually heals the problem and most children resolve any difficulties on their own by the age of seven.

The most important thing to remember about bedwetting is that it is involuntary.

It is not fully understood why bedwetting occurs. It is thought to be a stage whereby the child has not fully developed his or her bladder control mechanisms fully for use at night. Very rarely is it an infection; however, if you are concerned, it is a wise idea to take your child to a healthcare professional for a check up.

The child may be consuming too much fluid before going to bed, which could trigger or aggravate the problem.

Any new, stressful situation may cause a child to revert to bedwetting, as can being overtired or sick. Once your child adjusts to the situation, the problem should resolve itself. If your child does not improve, consider Bowen therapy.

“Matthew”, aged seven, had been wetting the bed since infancy, roughly six nights per week. His mum didn’t want him to feel bad about the fact that he was bedwetting, so she prepared him for his visit to Bowen practitioner by simply asking Matthew a question, “What would you be willing to do, to not have to wear your pull-ups to bed?” “Mummy I’ll do anything!” he replied. “Well, I know someone who can give you a Bowen ‘massage’ that might be able to help.”

During the first session Matthew received a whole body balance in preparation for the subsequent sessions. A week later he came in for his first session of the Bowen Bedwetting Protocol. The protocol is performed weekly until seven consecutive dry nights are achieved. Some improvement is often seen after two to four, 15-30 minute sessions.

Bowen Therapy is a very gentle hands-on technique, which includes a few wait periods that allow the body time to integrate the work being done. It is common during a Bowen session for clients to feel different sensations. During the first session Matthew said that he felt both warmth and “ticklishness”.

After the third protocol session Matthew, again, had four dry nights and after the fourth session, six dry nights. During these sessions his body had alternating sensations of heat and cold – signs that his body was responding well.

Before the fifth session Matthew announced that he had been dry for seven consecutive nights – every night! The fifth session then became a reinforcement of the Bowen work.

If your child is bedwetting, it is worth considering Bowen Therapy. It has helped many children the way it has helped Matthew.

To book your appointment:

in Redbank Plains or Springfields, QLD with Elena Dovgal  call/text 0434 868 100 or Email elena@bowen-therapy.com.au